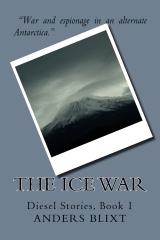 Here is a summary of what story is about:

The year is an alternate 1940. In Europe breakaway Czech and German republics have taken up arms against the oppressive Habsburg Empire. Rebel spy Johnny Bornewald is dispatched to the southern-most continent of Alba on a routine mission. War unexpectedly erupts there, too, and Johnny and his native guide Linda Connor must flee across Alba’s icy wastelands. More than arctic cold and gunfire imperil their lives when they get entangled in a conspiracy that may change the course of the war. Are Linda and Johnny wily enough to outfox their enemies?

The Ice War is a dieselpunk thriller inspired by the technology and aesthetics of the interwar era. The protagonists face serious moral issues during their flight. There is no easy way out and no one escapes a war zone unhurt.

Swedish science fiction author Patrik Centerwall’s assessment of the story: “The Ice War is a well-written, swift-moving and exciting adventure that touches several interesting issues of morals and philosophy. Anders Blixt does not make matters easy, neither for the novel’s characters nor for the readers.”

The Ice War is partially based on the author’s experience as in multinational peace-making operations in the Balkans in the 1990s and Afghanistan after 9/11.