The Doof Wagon from Mad Max Fury Road in Lego. More pics of it here — link >>>

Lipatov at Deviantart is my favourite dieselpunk illustrator. Here is one of his inspiring pictures (click on it to get a larger version). I’d love to be there.

When I was a young man, raptor dinosaurs were depicted as grim-looking scaled predators with cruel claws. Sadly, perhaps, science marches on, and when I see a depiction of what palaeontologists currently claim those animals looked like, I rather think of Pokémon creatures. No nightmare fuel no more.

You will get a larger version of the picture by clicking on it.

For a few years I have been working on and off on a collections of diesel-fantasy tales called Rimland Tales. They are gritty pseudo-contemporary stories with machines and men, but without elves and evil overlords. Currently I have two completed short-stories about the place called The Rimlands and since 2014 I have been struggling with a concluding novella called Dusk and Dawn.

During the past weekend, when my family was celebrating the Midsummer festival (Sweden’s second biggest holiday after Christmas) in our traditional way with some old friends at their summer house in a silent pine forest, I doodled for a while in my little black notebook, trying to get the novella’s denouement into working order — there, voilà, the pieces of the jigsaw puzzle fell into place. Now I have three chapters to write, and then the protagonists have reached their goal.

Here is a brief introduction to the arid and wild Rimlands, setting the mood for the collection:

I will always associate Ariana with the smell of dust, dry as cinder. It is a land of few colours: brown soil, grey rock and green vegetation characterize the hills and valleys. What do the inhabitants really subsist on in this arid home of death? It took some time before I realized what the farmers cultivated and what their herds grazed. We will usually not eat what they grow, but they are able to eke out a meagre existence here.

The sole relief for my eyes was the blue sky, a brilliant shade that I had never seen back home. Occasionally puffy clouds would drift across it, adding white to the limited palette. The sunlight is so sharp that the human eye cannot determine its colour; just dazzling, be it white, yellow, or pale orange. It is only at the brief sunrises and sunsets that you are able to look in its direction and then the disc is orange, casting pink and purple hues across the sky.

What do we do here, aliens in an unearthly land, hated by some, distrusted by most and appreciated by too few? Ariana had for decades been a place shunned by the powers-that-be, the home of fierce natives and devoid of anything that would attract the attention of outsiders. However, the game of the thrones is played according to rules that often are hard to comprehend for common men.

Two competing models for ancient Mars: warm and wet to the left, cold and wet to the right. Get a larger picture by clicking on it. (Image Credit: Robin D. Wordsworth)

Astronomer agree that existing research data clearly show that ancient Mars was a wet planet. So far, the common opinion has been that it also was a warm world thanks to a denser carbon dioxide atmosphere.

However, a new study indicates that in ancient times, the Sun radiated significantly less heat and that ought to have made Mars icy instead. Such climatic conditions should have made Mars’s Northern Ocean similar our world’s Arctic Sea with drifting ice bergs.

Italian physicist Enrico Fermi asked an interesting question about life in cosmos many years ago: “Where are they?”; i.e., if there is intelligent life elsewhere in our galaxy, why have those beings not revealed themselves to us? After all, even with sub-luminal speeds it will “only” take a few million years for an intrepid culture to colonize large parts of the Milky Way. This is known as Fermi’s Paradox.

However, a counter-question is: “Why do it if one’s home system suffices.” The dreams of interstellar colonization arose in a century when Earth’s population grew with a tremendous speed. The forecasts for humanity’s future were dire. But now in the 21st century, it looks like Earth will reach a population plateau in the foreseeable future so our planet will be capable of sustaining mankind for a long time. The solar system is full of mineral resources that soon will be within reach for commercial exploitation. So if there is no way of travelling faster than light, it seems likely that many advanced civilizations would stay at home: orbital habitats, a partially terraformed Mars and other man-made abodes should provide room enough for our descendants. And the Sun will supply them with all the energy they need for millions of years.

Crossing the interstellar void, on the other hand, takes generations and consumes incredible amounts of resources for uncertain gains. And the planets people could find around alien stars will most likely be inhospitable to our species: the movie Interstellar comes to mind. 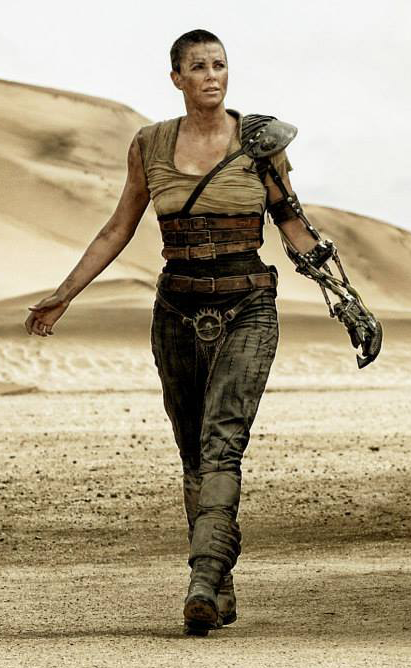 Last week I watched the new Mad Max movie and walked out of the cinema quite surprised by what I had seen. The heroes had been ten (IIRC) women and two men, whereas the badguys had been solely male. I liked that arrangement. Also, the main protagonist was not Max Rockatansky, who in fact spent most of the movie playing second fiddle to the slam-bang heroine Furiosa.

The movie provides two hours high-octane action with cars, motorbikes and weird-looking people fighting across a stretch of Namibian desert that depicts the franchise’s traditional barren post-apocalyptic style perfectly. The storyline is simple: Furiosa helps a team of concubines, the so called “property” of the Big Bad warlord Immortan Joe, run away in her huge truck and Max gets accidentally entangled in the scheme. The characters’ back-story is minimal and that does not matter, because their actions define their qualities. I will not say much about the plot, because I do not want to spoil the surprising twists and turns along the track. However, it is extremely rare to see such a number of competent warrior ladies team up in a Hollywood action flick.

A sequel is said to be on the way. I want Furiosa to be its main character instead of Max. She is a more complex and interesting person. I cared a lot about her fate, but not that much about Max’s. And her prosthetic arm was an impressive piece of jury-rigged mechanics.

I give Mad Max Fury Road four roaring engines out of five.

Hollywood is developing yet another space blockbuster, The Martian, which apparently deals with the survival troubles of a solitary NASA astronaut accidentally stranded on a fairly realistic Mars. The trailer looks great, but I am concerned with one particular issue: will the movie be scientifically accurate? If yes, I will watch it in a 3D cinema here in Stockholm; if no, I’ll wait for it until it turns up in the “cheap DVDs” bin at the local supermarket somewhen in 2016.

For more than a year I have been writing a novella called Dusk and Dawn. It is a piece of diesel-retro science fiction, taking place on the same planet as the short-story ‘The Road’ that was recently published in the anthology Waiting for the Machines to Fall Asleep, though both stories stand alone and take place in locations far apart.

Dusk and Dawn will soon be completed; looking ahead from a metaphorical crow’s nest, I see my port of destination in the distance. The novella will be a part of a collection called Rimland Tales. I have already completed its two initial short-stories, one of which is ‘The Road’; the other one is called ‘Dust’. The collection’s internal chronology has one unoccupied “slot” between ‘The Road’ and Dusk and Dawn and I am therefore pondering on a possible second novella.

An excerpt from Dusk and Dawn, Chapter 2.

The steam engines that powered the elevators in the Tower of the Dark Voice were out of order due to lack of spare parts. Breathing heavily I reached the top of its spiral stairs just as the setting sun touched the horizon. Storm sat in a corner with a small backpack and the quarterstaff and we exchanged silent greetings. I was in no mood for talking with my legs exhausted from the long climb and my mind focused on the next task at hand.

Instead I walked to the railing. Here, a few hundred paces above ground, no buildings obstructed the wind, so the steady breeze soon dried the sweat from my torso. I emptied two bottles of water while I regarded the jumbled towers of my home city, ancient ruins mixed with recent edifices.

The sun disk vanished and the sky changed into star-flecked darkness. The Father-and-Son double planet shone sharply ten fingers above where the sun had set, while the Red Wanderer gleamed far higher in the sky.

I have been a great fan of the Victorian-era science fiction role-playing game Space 1889 since 1990. My gaming group has experienced more than a hundred dramatic adventures on the Red Planet in the service of King Oscar, Tsar Alexander, or the French Republic. And now a group of enthusiasts want to make a Jules-Verne-esque Space 1889 movie, called The Secret of Phobos. They have launched a crowdfunding at Kickstarter — link >>>

“This is a project of a bunch of German authors and video-journalists around Nico Mendrek and Mháire Stritter. They are RPG experts and have a lot of experience with no- or low-budget film productions. They are also extremely well connected within the German roleplaying and fantasy scene and are therefore able to gather a lot of resources like manpower, costumes of cosplayers and indie-musicians to get this film made for very little money.”

I salute these chaps for their moxie and hope that they accomplish their goal, i.e., sending the protagonists Edison and Armstrong to the jungles of Venus and the deserts of Mars. Here is a teaser that explains what they are about to do: