Storium Colony by The Art of Saul at DeviantArt.

The New Era cosmos of the Swedish space opera RPG Sci-Fi! contains many cadaver worlds, i.e. planets that were so ruthlessly exploited by the fallen Zakharr Empire that their ecosystems perished. This is a good depiction of such a world.

Twin Gorges by The Art of Saul on DeviantArt. This is a Canal Martian city straight out of the Space 1889 role-playing game. Click on the picture for a larger version.

I am a fan of both Star Wars and Lego. Here is a great minimalist diorama with Rey, my favorite SW7 character, with her robot sidekick. Click on the picture for a larger version.

“Nach Tibet” from the diesel dreams of Waldemar Kazak. (Click on the picture for a larger version)

Robert LaDuke has made a set of artdeco paintings featuring great-looking dieselretro vehicles. You will find the whole set here — link >>>

Summary in English: A diorama depicting a scene that fits the Swedish space opera RPG Sci-Fi! 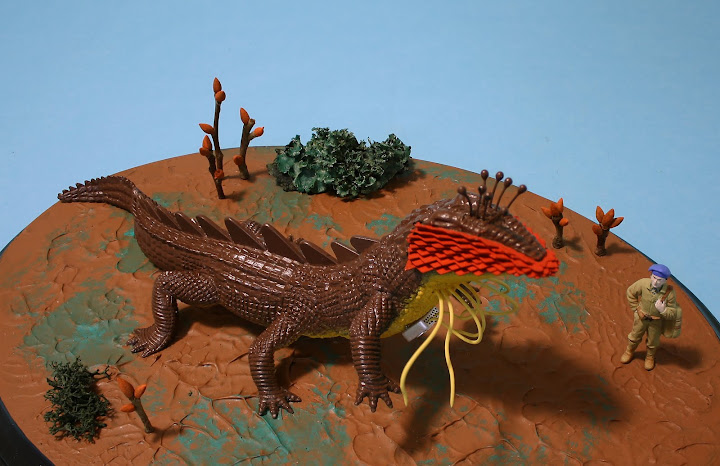 Finn, Rey, Kylo Ren, and BB-8 in pharaonic style. Unfortunately I have no idea who made this delightful pastiche.

“The mind, once expanded to the dimensions of larger ideas, never returns to its original size.”
— Oliver Wendell Holmes, American physician and poet, 1809-1894

A few years ago I started working on a set of retro-tech* science fiction stories that take place in the multifaceted Patchwork World. I have now published the first e-book in the series, containing two stand-alone short-stories — link to the book >>>

“Dust” has its origin in my stint in Kabul in 2008-09 and is an account for what daily life is like for an expatriate expert in a fictional war-torn city. It also looks at why a middle-class professional chooses to go to a dangerous faraway place for the sake of people he does not know.

This is the beginning of Dust:

“The Road” addresses what post-war life may be like for a veteran. There will be no return to a previous normality. In 2015 “The Road” was published professionally in Waiting for the Machines to Fall Asleep, an anthology with stories in English by Swedish science fiction and fantasy authors. My story received favorable mentions by several reviewers and that encouraged me to move ahead with the Patchwork World project. For example, here is what Chuck Rothman wrote about “The Road” at Tangent Online:

“Kitu is a marshal on ‘The Road’, keeping traffic moving on the major transportation route on another world. She finds two friars, Brod and Klim and helps them on their way. But Kitu sees through their appearance to discover that they have secrets, and offers to help, as we learn she has secrets of her own. Anders Blixt creates a vivid society, and Kitu is an excellent character.”

Two years ago I started working on Dusk and Dawn, a stand-alone novella that takes place some years after “The Road”. It is an action adventure in a part of the Patchwork World that is very different from the milieus in “Dust” and “The Road”. However, I write in my spare time, so it moves forward more slowly than I want.

* The label retro-tech indicates that people in the stories use less sophisticated technologies than ours; it can also be referred to humorously as “the future as it used to be”. For example, the Oceanic civilization in “Dust” and “The Road” has radio valves, diesel engines and cars, but lacks semiconductors, helicopters and jetliners.