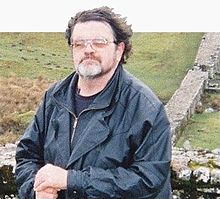 The veteran game designer Loren Wiseman passed away yesterday. He worked for many years at GDW with both board games and role-playing games and after the demise of that company, he produced GURPS Traveller for Steve Jackson Games. His former colleague Marc Miller has written the following eulogy:

I first met Loren Wiseman more than forty years ago: he was one of the small group who played games in the University Union at Illinois State University, and a fountain of knowledge about history in general and ancient history specifically. When Frank Chadwick, Rich Banner, and I created Game Designers’ Workshop, we immediately added Loren to our partnership because he was a solid, dependable, and insightful friend. I have never regretted being in business with Loren.

Loren designed the fifth game published by GDW: Eagles, Rome on the Rhine Frontier, AD 15. He had a catchy concept: retrieving lost Roman legion standards (the Eagles) from the Germanic tribes, and he did an excellent job that made us proud. We were equally proud (and a bit jealous) when Avalon Hill picked up the game and published it under their banner. He followed up with Pharsalus, a board wargame of the Roman Civil War 48 BC in 1977.

Loren did a variety of jobs at GDW and they shaped everyone’s perception of him. He ran the warehouse at a time when everything was done with pen and paper and by hand. When we created the Journal of the Travellers’ Aid Society, he became its editor.

Loren also was the line developer for Twilight: 2000. The process at GDW was for the designer to write the text, but the developer brought together that text and some draft diagrams and some art needs, typeset it, and then made sure it was properly published. It also fell to Loren to design titles in the series (out of 46 supplementary titles, he is credited with designing 20).

After GDW closed its doors (in 1995), Loren moved to Steve Jackson Games in a variety of roles, including editor of their Journal of the Travellers’ Aid Society online edition.

Along the way, Loren was recognized for his excellence and expertise: with the H G Wells Award for Going Home (1986), and the H G Wells Award three years running for the Journal of the Travellers’ Aid Society (1979-1980-1981). In 2004, Loren received perhaps the highest of honors within the gaming community: he was inducted into the Adventure Gaming Hall of Fame, and the above recounting of his credits gives some insight into why.

But I remember Loren as a friend and a game player. I remember he and I both in a board game competition at GenCon many years ago. I rarely play games, and so I was gratified to make the finals, but in the end Loren beat me. That is what the industry he loved is about: friendly competition, with an emphasis on “friendly.”

Loren is the chap who put me on the professional game designing track. I started playing Traveller in 1978 and in 1979 I bought the first issue of Journal of Travellers’ Aid Society, GDW’s inhouse magazine for the game. Loren served as its editor. He accepted my first submission surprisingly quickly and for many years he kept on accepting my Traveller articles with only an occasional and well-explained rejection. I still have a photocopy of the first cheque he sent me way back in 1980 (more about that here — link >>> ).

In 1990 I had the pleasure of meeting Loren face to face at a Swedish game convention in Sundsvall, where he was the guest of honor. A pleasant chap in all regards. He will be missed by all in the game industry.

A salute to his memory: