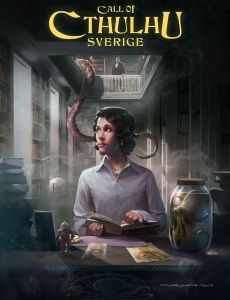 I have been an inactive blogger recently. The cause is what you would expect: shortage of time. I am currently spending a lot time on localizing Call of Cthulhu to Sweden. Among techwriters, localization is a form of translation in which you not only translate from language to another, but you also make the product fit the new market by removing superfluous information, and inserting new information that your domestic customers need.

In the case of Swedish Call of Cthulhu, the publisher Eloso wants to give the game a distinctive “Sweden in the 1920s” flavor. Swedes today know little about what our country was like hundred years ago, so we must explain how e.g. law enforcement, academic institutions, and municipal bureaucracies functioned.

For instance, when the intrepid investigators do research in rural areas, a good source of information might be the local hembygdsförening (“local history association”), whose members delve into the past of their parish or village, holding lectures and writing newsletters and booklets about nearby rune-stones, old churches, and legends of things that go bump in the night. The local temperance lodge keeps a keen eye on the inhabitants’ use and abuse of alcohol, so its leaders might know who is making moonshine and who is smuggling illicit Estonian vodka.* The vicar** of the parish church occupies central role in rural society; apart from his ecclesiastical duties, he is charged by the state with maintaining a detailed population registry, keeping track on births, deaths, marriages, people’s domiciles and other matters. He therefore knows a lot about who is doing what, even though he might be unwilling to share his knowledge because of his pastoral vows.

In the major cities, the above-mentioned organizations are of lesser importance. Instead, trade union chapters and sports clubs in the neighborhood may provide useful information. Social control remains tight because people, apart from the very wealthy, live under cramped conditions in rickety apartment buildings.

We, Eloso’s team of CoC developers, are therefore busy with giving the original rules a Swedish touch and adding brand-new material, such as site descriptions, Swedish grimoires, new adventures, etc. We’ll spend the winter 2019/20 with these chores, a good reason to stay indoors and avoid the sleet and darkness of the season.

*In a tight national referendum in 1921, the Swedish electorate rejected a US-style prohibition; instead, they got a rationing system (link >>>) by which adult citizens in good standing were allowed to buy a certain quantity of hard liquor per month. People were of course circumventing the restrictions in more or less ingenious ways. Smugglers who transported Estonian vodka to Sweden by speedboat became folk heroes. Read about the dashing Algoth Niska here — link >>>
**The established Lutheran Church of Sweden had been governed by the king/state since the Protestant Reformation in the 16th century. In the 1920s, anti-clerical socialists and Christian dissenters, mainly baptists and presbyterians, disliked this arrangement but lacked the political clout to change it; it was eventually reformed in the 1950s.