Forty years ago, I began my full-scale academic studies: political science/international politics (plus some macroeconomics, classical history, and modern languages). I remember my first lecture: the history of political thought, chapter 1, Plato & Aristotle. Great lecturer, Dr Gunnar Falkemark, whose first sentences grabbed my full attention. He made me realize that I had found my proper academic track.

And that way, my life changed for the better. Three semesters of pol-sci turned out to be serendipitous when I, four years later, became a professional RPG designer. Thanks Dr Falkemark and my gaming buddy Pär-Adam Claus who suggested that I take a close look at political science: “That subject ought to suit you.”

I am still doing my duty for our nation at the Civil Contingencies Agency. Every weekday evening, I fall asleep easily; every weekday morning, I get on the half-empty metro train heading for the office. Yes, what I do there does matter for my fellow citizens. And that’s what counts.

This bearded scholar at British Museum would be a splendid NPC in so many RPG settings, such as Call of Cthulhu, Chock, Skuggornas Mästare, and Buffy. Here he explains how he deciphered the cuneiform rules for the ancient boardgame “Twenty Squares”.

Fifty years ago, the Apollo project sent 27 astronauts to the Moon. I was a child and followed their live broadcasts on TV together with my father, an aerospace engineer in the then-nascent European space program. The Lunar exploration lasted for four years and eleven launches, after which the United States retrenched to a more modest space program. Hopefully, I will see astronauts on the Moon again some day, perhaps in the company of curious and eager grandchildren.

Let me be like Bach, creating fugues
Till suddenly the pen will move no more.
Let all my themes within — of ancient light
Of origins and change and human worth —
Let all their melodies still intertwine,
Evolve and merge with growing unity,
Ever without fading
Ever without a final chord …
Till suddenly my mind can hear no more.

Beatrice Tinsley (1941-81),
Ph D, professor of astronomy at Yale University
Read more about her successful career as a cosmologist — link >>>

Jet Propulsion Laboratory, one of NASA’s top research facilities, is currently investigating whether it is feasible to design a wind-powered clock-work rover for Venus, tentatively named Automaton Rover for Extreme Environments (AREE). The basic concept was conceived by Jonathan Sauder, a mechatronics engineer at JPL.

AREE is designed to function on Venus’s surface without electronics, because the searing (470°C) and crushing (92 bar) atmosphere destroys such components quickly. Fortunately, the planet’s forceful winds can power Savonius wind turbines that provide the required mechanical energy for ground propulsion and on-board devices, for example a mechanical computer. Ergo, AREE is a clock-tech design made of hi-tech materials able to survive in that hellish environment for months.

AREE communicates with a Venus orbiter by a contraption of radar-reflective panels that can be set at various angles. The orbiter broadcasts a radar signal that is reflected back from those panels; the received “image” is then decoded by the orbiter. This simple device is comparable to Morse code or 18th-century semaphore telegraphs. (Also, check the movie The Martian where a stranded astronaut devises a similar method to communicate with Earth.)

Click on the AREE picture for a larger version.

The eminent site XKCD has published this picture that compares the surface areas of notable rocky celestial bodies in our solar system. The four giant planets are excluded because they lack mappable surfaces. The arrangement would be laid out nicely on the type of Ringworld that Larry Niven proposed in some of his stories — link >>> 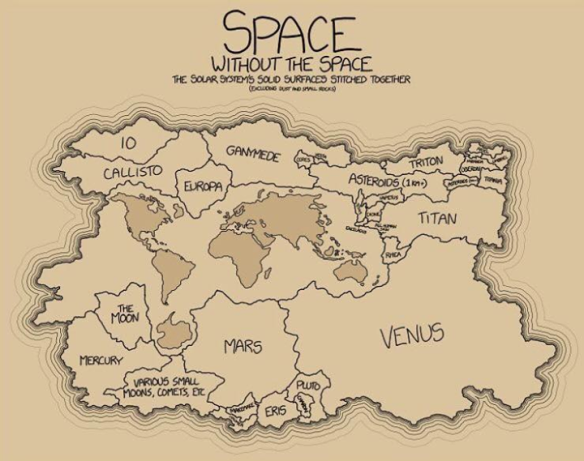 NASA is currently investigating what materials and devices could be used for future Venus landers. The planet’s hellish environment degrades even stainless steel quickly, so research probes have so far ceased to function within two hours after touchdown. The Glenn Extreme Environments Rig is a 14-ton testing chamber that recreates Venus’s toxic, corrosive, and hot surface conditions.

Inventor Nikola Tesla in his laboratory. The archetypic “mad scientist”, though actually a real-life person.

Sea Warfare is an unexpected little non-fiction book by Rudyard Kipling, the Nobel Laureate who today is famous for poetry and short-stories dealing with imperialism and the Indian Raj. I recently found an ebook edition free of charge at Amazon.

The book was written in 1916 or 1917 as a piece of propaganda to bolster morale on the Home Front. Nevertheless, Kipling rarely wrote poorly so this remains an interesting volume despite occasional outdated views and phrases. The reader learns of the everyday toils of the Royal Navy’s non-glamorous small craft, e.g. minesweepers, destroyers and submarines. Kipling used after-action reports and interviews with ratings and officers as his sources, though he changed many ship names because of wartime secrecy.

HMS E9. Sea Warfare describes some of her wartime exploits in the Baltic Sea. Click on the picture for a larger version. (Photo: Imperial War Museum, London)

Despite the obvious bias, i.e. chivalrous Britons fighting cruel “Huns”, these stories tell a lot about sailors’ wartime chores, for example, the hardships of mine-sweeping in the North Sea and the harrowing experience of serving aboard a tiny destroyer facing the Kaiser’s battleships in the titanic North Sea clash that is called the Battle of Jutland.

The book also addresses a few matters that I had not heard of before, for example the British submarine operations at the outskirts of Constantinople during the Gallipoli campaign in 1915. Tiny subs hunted Turkish ships in the constricted waters of the Dardanelles Straits and the Marmara Sea, hampered by mines and shore batteries; an underwater campaign very different from the one that Germany pursued in the North Atlantic at the same time.

I write diesel-era adventures and Sea Warfare provides me with useful setting information for future stories. I have already outlined a riverine tale in the Patchwork World setting. So my verdict is four armed trawlers out for five.