During the spring, I pondered a lot on what would become the next installment in my Expert series of games, nowadays produced by Swedish game publisher Eloso where I recently became a minority partner. After a while, I made up my mind: Expert Outreach, post-apocalyptic space opera in which mankind has to survive in a dark cosmos. It is an extensive development of grim visions for the future that I previously have written about in Swedish (link >>>). Expert Outreach will only be published in English.

I have always had a fondness for science fiction RPGs, ever since I entered the universes of Traveller in 1978 (English link >>>); that game turned me into a professional game designer seven years later. I have experimented with plenty of futuristic settings over the years and acquired a taste for gritty ones, that is, The Expanse rather than Star Trek; Rogue One rather than The Phantom Menace. I give Expert Outreach the label “post-apocalyptic space opera”; its theme is “mankind facing a dangerous future” in which our survival as a species is at stake.

Despite my temporary assignment (ends August 31) as an information analyst at the Swedish Civil Contingencies Agency, June has been a surprisingly productive month. So far I have outlined two-thirds of Expert Outreach and written perhaps one-third of the background. I see no significant obstacles when it comes to content, because I know what the game needs and how to make it work.

Expert Outreach uses an adapted version of the Expert Nova rules (that is, my variant of Basic Role-playing 1D20). Elin Blixt does the interior artwork, whereas Clarence Redd and Andreas Sölvebring contribute text. Hopefully some other Swedish game writers will join my creative team.

*”Mark how our shadow…”, a quote from the well-known song Fredmans Epistel no 81 by 18th-century troubadour CM Bellman. It describes the burial of a lady acquaintance.

Completing a challenging game-writing assignment is always a mixture of elation and weariness. In this case, a few days ago, I delivered my intro adventure to the new second edition of the Swedish horror RPG Chock (“shock” in English) by Eloso. Ten thousand words dealing with young men dying strangely in Stockholm’s finance industry in the late 1980s. This setting coincides intentionally with my time at Target Games as its editor & in-house game designer; we then published the first edition of Chock, which (unlike the second edition) was a straight translation of Pacesetter’s Chill.

Designing games in my spare time is always an up-and-down experience: while writing this adventure, I have also had a regular office job as a techwriter, moved to new home, assisted my three daughters with this and that, been knocked over by an Italian stomach infection (steak tartare is tasty but hazardous), and so on. But writing games and fiction is such a pleasure that I won’t stop doing it despite being short on time.

Next major challenge is developing the Swedish Wastelands setting for the post-apocalyptic RPG Freeway Warrior by Åskfågeln. I have a pretty good idea what I want to do — for example taking a closer look at my old hometown Gothenburg and the farmlands of adjacent Västergötland — and I have some old stuff that can be overhauled to fit the new context. This will be fun.

If you want to support my continued game writing, please sponsor me at my Patreon page — link >>>

If I get sufficient backing, I’ll switch to designing new games and stuff full-time.

I haven’t touched the blog for three weeks, because I have been terribly busy with my daytime job as a techwriter and with various family-related matters. However, I’m gearing up for an exciting fourth quarter. My first priority is to complete my introductory adventure to Eloso’s new Swedish horror RPG Chock. Only 20% of the text remains to be written.

After that, it’s time to get going on Wastelands Sverige, a Swedish setting for Åskfågeln’s postapocalyptic RPG Freeway Warrior. My setting is based on the classic Swedish RPG Wastelands from 1991, updated to fit the 21st century. I intend to pay a lot of attention to the port city of Gothenburg and to the fertile farmlands of the adjacent province of Västergötland.

And there are a few other “gamey things” in the pipeline, though my non-disclosure agreements prevent me from saying more. It looks like I’ll have an exciting 2019 when it come to writing games.

I am still working on my Patreon site, and I want to get it up and running before the end of the year.

As for my science fiction and fantasy novels, they are in the backburner for the time being; they have no deadlines, unlike the game texts.

Summary in English: I explain why and how I these days write settings for Swedish roleplaying games.

Summary in English: a scene från the Swedish RPG Wastelands 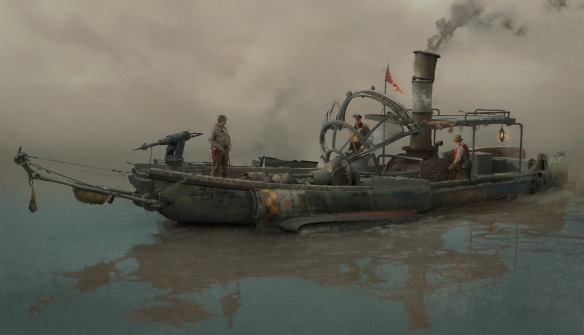