I have activated my Patreon page. My supporters get access to RPG articles in Swedish or English, among other things my first complete game, Thriller, an espionage/action RPG with science fiction opportunities. I wrote it in 1983-84 but it never got published. And more content is on the way.

Link to my Patreon page >>> 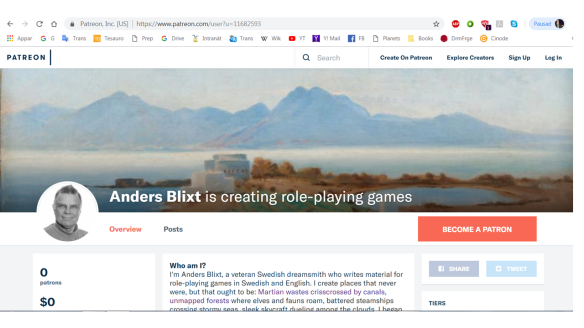 This weekend, I made a complete mock-up of my Patreon site. What remains to do is adding the final batch of PDFs.  My Patreon supporters will get access to: Thriller, the first Swedish role-playing game I wrote; an English alpha version of the rules to Iron Mars, a dieselpunk planetary romance RPG I have been working on for over a year; and some other goodies in Swedish or English. And there is more stuff waiting in the pipeline. Launch within a week or so, so stay tuned to this blog for further news.

I haven’t touched the blog for three weeks, because I have been terribly busy with my daytime job as a techwriter and with various family-related matters. However, I’m gearing up for an exciting fourth quarter. My first priority is to complete my introductory adventure to Eloso’s new Swedish horror RPG Chock. Only 20% of the text remains to be written.

After that, it’s time to get going on Wastelands Sverige, a Swedish setting for Åskfågeln’s postapocalyptic RPG Freeway Warrior. My setting is based on the classic Swedish RPG Wastelands from 1991, updated to fit the 21st century. I intend to pay a lot of attention to the port city of Gothenburg and to the fertile farmlands of the adjacent province of Västergötland.

And there are a few other “gamey things” in the pipeline, though my non-disclosure agreements prevent me from saying more. It looks like I’ll have an exciting 2019 when it come to writing games.

I am still working on my Patreon site, and I want to get it up and running before the end of the year.

As for my science fiction and fantasy novels, they are in the backburner for the time being; they have no deadlines, unlike the game texts.

I am currently busy fixing a lot of things at home and that is a recipe for serendipitous discoveries: in this case, I unearthed the typewritten manuscript for Thriller, my first complete role-playing game design.

In the summer of 1983 I worked night shifts as a solitary security guard at a factory in my hometown Gothenburg. The nights were long and dull, so I took a small typewriter to work  and wrote Thriller during the slack hours between my patrol rounds. (My boss didn’t object, because my hobby kept me awake.) The game was based on tropes from the spy comics (e.g. Secret Agent X-9) and action-hero television series (e.g. The Professionals) that were available in Sweden in the 1970s and early 1980s.

Thriller was an adequate game in those days, though it is outdated nowadays. I submitted its manuscript to Titan Games, the Swedish company that a few years later published Swedish Dungeons & Dragons, but they were not interested. I kept on working on the project for some time: my manuscript contains an addendum from 1984 that outlines a parallel-worlds setting, comparable to Steve Jackson’s much later GURPS Alternate Earths. I remember play-testing a Thriller adventure in late 1984 with Ylva, Christer, and Per, three university friends in Lund. The set-up was a cross-over with Call of Cthulhu, even though the players never realized it. Hence Thriller was flexible enough to handle any kind of contemporary action-oriented campaign.

However, when I joined Target Games in April 1985, I got busy with that company’s games so Thriller ended up in my collection of unrealized game projects.

A scanned PDF in Swedish of Thriller will become available for my supporters  when my Patreon page is up and running.

I have decided to tell you, at irregular intervals, how my preparations for my Patreon page are progressing. So here is my first report.

I have had a brain-storming session with a friend to determine my focus and priorities. My conclusions were pretty straightforward:

Well, that’s all for today. Please stay tuned to this blog for further news.

“Anders Blixt is a machine that turns coffee into role-playing games.”

This summer I have started working on a Patreon page. My intention is to create an interesting library with English and Swedish gaming articles (plus occasional fiction, and non-fiction) for my supporters’ enjoyment. I have accumulated a lot of unpublished “stuff” over my 35+ years as a professional game designer and writer, and I have ideas for plenty more. My three children are now adults or almost-adults, so I have more time for sitting at my laptop and turn coffee-fueled dreams into texts. And these days, there are publishing tools available that would have been science-fiction-ish at the time of the publication of my first paid article in 1980: “The Werewolf Disease” in Journal of Travellers’ Aid Society #5 .

I have no idea how many months it will take for me to put together an attractive collection, because many old texts exist only on paper and need to be scanned and processed. And I have no wish to launch my Patreon place too early and thereby make my supporters disappointed.

Therefore, my advice is: stay tuned to this blog.