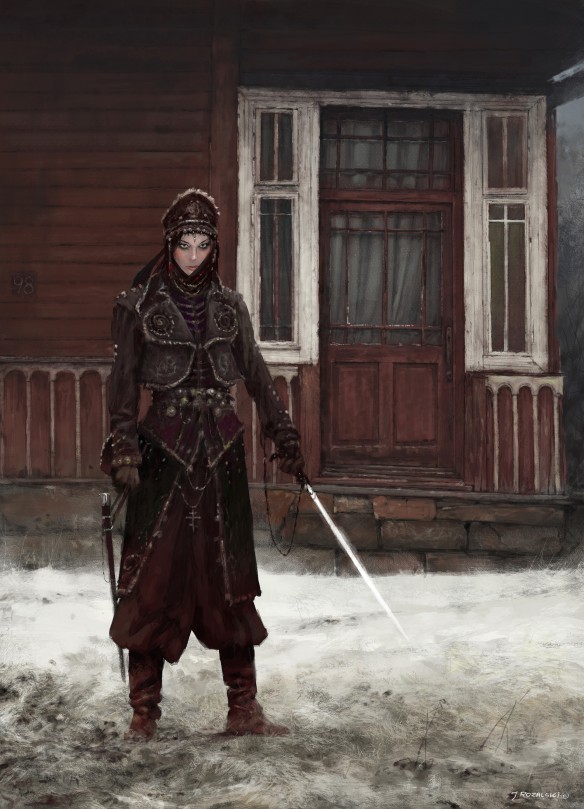 A classic Star Wars event moved to a diesel-era setting, perhaps inspired by the uprisings in Warsaw 1944 and Budapest 1956. I also see a connection to the Lemuria dieselpunk setting that Krister Sundelin, Tomas Arfert and I created more than ten years ago.

Artist: Sergey Vasnev at ArtStation. Click on the picture for larger version.

The strong position of Star Wars in our modern western mythos is aptly proven by how easily it is mixed with other genres in credible ways. Here an unknown artist has successfully used the distinctive ligne claire style made famous by Belgian comic book maestro Hergé.

I am a great fan of the Studio Ghibli movies since many years and my particular favorite has always been Nausicaa of the Valley of the Winds: great post-apocalyptic world, good plot and a fantastic protagonist. Here she is in a pseudo-realistic rendition. Click on the picture for a larger version. (And here is the soundtrack — link >>> )

A sunset vision of the canal city Tetchin Dzîr in the Flatlands, as portrayed in my soon-to-be-published novella Dusk and Dawn. The story is a part of my Patchwork World setting. Click on the picture for a larger version.

Artwork by Jeremy Paillotin on DeviantArt.

Picture by Raph on DeviantArt. Click on it for a larger version.

During spring I was busy writing an ocean-faring campaign book, Skymningshavets gåtor (“Mysteries of the Sunset Ocean”), for a new edition of the Swedish fantasy RPG Drakar och Demoner.

After completing it, I returned to Dusk and Dawn, a Patchwork World novella that is a stand-alone sequel to the short-stories “Dust” and “The Road” (link >>> ). I had not touched the story for a year because I have been wrestling with the final chapter, but now some troublesome plot pieces have fallen into place and only three or four concluding scenes remain unwritten. Let’s hope that I soon will get time and energy to do that.

I have drawn a lot of inspiration from Jared Diamond’s Guns, Germs and Steel, a book that attempts to explain why certain pre-industrial societies “did better” than others; the author argues that a culture’s ability to progress is mainly determined by its basic productive resources, such as available crops and domesticable animals.

These ideas were hardly present when I started writing Dusk and Dawn in 2014, but the protagonist Fennec kept on making “Diamondian” observations during a journey through her desolate homeworld. I hope that Dr Diamond, would he ever read my story, will nod approvingly at Fennec’s deductions and outside-the-box conclusions.

The Star Wars cosmos is easily re-staged in alternate settings and styles. Here is diesel-retro rendition of an aircraft clash by Alexey Mordovets. Click on the picture to see a larger version.