When you buy a car, you look for a model whose performance suits your needs. The generic car, equally good at all tasks, doesn’t exist. This observation also applies to RPG rules: their designer has, hopefully, a clear notion for what purposes his game is intended.

So, when I start working on a new set of RPG rules, I first visualize a key issue: “What do the adventurers do here?” In other words, what kinds of story/movie/TV-series do you wish to emulate? Your decision takes you to the next question: “What important features does your choice require?” (Dogfighting spacecraft? Sneaky espionage gadgets? Clever heists?) Hence, you must establish a set of precepts to serve as the foundation of your project.

My favorite example is West End Games’s Star Wars D6 from 1987, designed by Greg Costikyan. When I read that game for the first time 33 years ago, it was like seeing an intricate piece of machinery put together by a master craftsman. Greg knew exactly what the Star Wars setting required and he designed the game accordingly, scoring a Gold+ medal for his efforts.

One year ago, I decided (at the spur of a moment) to write Expert Nova. From hour one, I knew for what types of campaigns its rules were intended. My intentions are summarized in the following precepts (central ideas are underlined):

A Swedish game designer recently asked me whether he could use my rules for a new game project. When he explained its setting to me. I saw that it lay within Expert Nova’s scope, so I granted him permission. I’m looking forward to see what he will accomplish with the Expert Nova “toolbox”.

My new role-playing game Expert Nova, English Edition is now available as a PDF at Drive Thru RPG — link >>>

Expert Nova is my new role-playing game for action and mysteries in settings from the late Victorian era to a near future in which man still is the measure of all things. Put your players to the test in London’s seedy alleys, the trackless jungles of the Amazonas, the catacombs under Paris, or the Templars’ hidden headquarter. It is a translation of the Swedish version that I published last year, though with an extra chapter explaining campaign design according to our distinctive Swedish RPG lore. 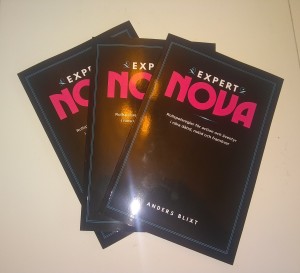 Recently, I published my new Swedish role-playing game Expert Nova at Lulu.com (link to the game in my Lulu shop >>>). Its is designed for real-world or science-fiction campaigns in the contemporary era (i.e. circa 1880 to 2050).

So far I have seen one review (it’s there at the game’s Lulu page); the reviewer awarded five stars out of five. I am eagerly waiting for the review in the Swedish game magazine Fenix later this autumn.

When I started working with Expert Nova in the late Spring, I made a mental survey of what role-playing games there currently are in the Swedish market. Half a dozen or more are competing the fantasy niche, each targeting a particular age or style segment. In the post-apocalyptic niche, there is one multi-faceted line, and as for space opera there are a few titles. But when I considered the contemporary/near future/near past niche, there was only one tentative competitor and it doesn’t resemble anything in my oeuvres.

In my gaming group (playing weekly or bimonthly since the 1980s), we have enjoyed several fairly low-key campaigns set in the 20th century, e.g. cops in Vermont 1931 or in Los Angeles 2003; freewheeling British intelligence officers in WW2; Soviet investigators of UFO phenomena in 1956; pulpish adventurers in 1930s Far and Middle East; and so on. So I made up my mind and wrote Expert Nova as a set of flexible rules for that kind of campaigns, using plenty of detective, spy and soldier tropes in its explanatory descriptions because they are familiar to the readers.

I selected Basic Role-playing 1D20 as my foundation for Expert Nova, because I know that system inside out, having used it creatively since 1979. But in Expert Nova I deviate from BRP’s common implementation by cutting the PC’s characteristics from seven to four (Push, Knack, Sense, Grit) and reducing the number of skills to a score broad ones.

For example, the Soldier skill encompasses everything that a competent infantryman is trained to do: marksmanship, field-works, orienteering, spit-and-polish, instruction, first aid, swimming, etc. I want to enable the players to play competent characters that won’t get lost in an an adventure because their team lacks one narrowly-defined skill.

My current intention is to proceed with an Expert series by books, each dealing with a specific milieu or trope. Such a book is supposed to contain a setting with campaign advice for the game master, adventurer creation tips for the players, and an adaptation of the Expert Nova rules with setting-specific add-ons. Each book will be a complete stand-alone game.

During October I have jotted down several ideas and outlines. Some milieus came easily to my mind, such as an adventurous oldschool solar system (explanatory link >>>) or espionage in a Cold-War or a pre-Cold-War timeline. Below I outline three appealing settings:

I have earlier described myself thus: “Anders Blixt is a machine that turns coffee into role-playing games”. However, available time does not match my relentless creativity, so I must prioritize wisely. General Eisenhower once said:

I tell this story to illustrate the truth of the statement I heard long ago in the Army: Plans are worthless, but planning is everything. There is a very great distinction because when you are planning for an emergency you must start with this one thing: the very definition of “emergency” is that it is unexpected, therefore it is not going to happen the way you are planning.

Therefore, I make no promises about this or that Expert book. Please have patience and stay tuned to this blog for future updates.

Summary in English: My new Swedish RPG Expert Nova has been launched at Lulu.

Summary in English: I write about four people that inspired me when I wrote the Swedish RPG Expert Nova.