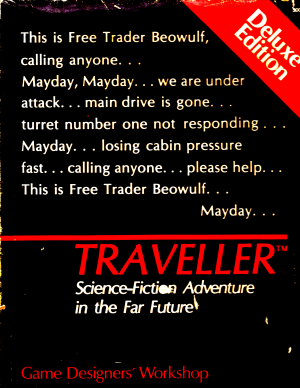 I have been playing role-playing games since 1977 and been a professional RPG designer since 1979. Three well-crafted games have been major sources of inspiration for me during these 34 years: GDW’s Traveller, Chaosium’s Runequest and West End Games’ Star Wars d6 RPG. Today it’s time to speak of Traveller.

I started playing and gamemastering role-playing games in the spring of 1977. At that time I only knew of Dungeons & Dragons and Empire of the Petal Throne, both heavy on spell-casting fantasy clichés. Their low-tech “societies” and the emphasis on dungeoneering did not appeal to me. Also, at that time Tolkien was the only fantasy author that I liked. Instead I preferred hard science fiction, in the spirit of Asimov, Clarke, Stableford and Heinlein. My favourite stories were the Foundation books, Rendezvous with Rama, the Hooded Swan hexalogy, and Have Spacesuit, Will Travel.

In 1978, I found the Traveller basic set, a black box with three A5 booklets: Rules, Spaceships, and Worlds. By today’s standards, this was not much of a game: simply rules how to create characters, use skills, build spaceships, do combat, buy equipment and create planets & galaxy subsectors. The booklets contained only game mechanics, no campaign background. But it was innovative in those years.

In what manner? I digress. Dungeons & Dragons originated in simulations of jousts between medieval knights. That is obvious in its restrictive mechanics, particularly in the versions published in the 1970s. Traveller was designed by people that know the science of geography, e.g. Marc Miller. This academic field influences the rules for designing planets. The gamemaster starts with specifying the planet’s physical qualities (size, atmosphere, hydropgraphy), which (according to a house rule) influence its population size, which in turn influences its political arrangements and technological development level, which in turn influence its economic parameters.

When you created player characters, they existed within a socioeconomic system. They chose professional careers and got money and equipment accordingly, they aged (occasionally even died) before entering the game. This is an approach influenced by social sciences and since my academic background is political science and history, this game turned out to be the right one for me.

Another cornerstone was a vast freedom of movement for the player characters. They chose how to earn their living and how to travel from place to place. Spaceships served as the ocean liners of a bygone era. It was desirable to design and purchase your own starships because then you controlled your own nomadic lifestyle. For that reason, a lot of rules were dedicated to those craft.

The GDW crew paid a lot of attention to how information was transmitted between solar systems, because that created a frame for how an interstellar empire would function. Information and people travelled at the same speed: an essential building block. Anyone who did away with that would immediately topple the political structures of the galaxy. This is how a geographer and a historian create a game cosmos with great individual freedom of movement and limited centralized powers in the empires. A central political body could only exercise limited influence over planetary polities, similar to the global empires of Britain, France and Spain during our 18th century. (The arrival of the telegraph and the steamship in the 1850s revolutionized global politics.)

I ran an extensive Traveller campaign from 1978 to 1982 and learned hands-on the importance of:
a. the internal coherence of a game world (inter alia political, social and macroeconomic credibility)
b. well-functioning rules
c. campaign continuity
d. clever plots
e. interesting NPCs
f. avoiding railroading
g. letting the PCs fully use their freedom of movement.

The galaxy was huge so I could always create exactly the planets, the antagonists and the riddles that my adventures required. A lot of input came from Desmond Bagley’s thrillers (e.g. The Gold Keel, The High Citadel) or from the action TV series of those days (e.g. the British Paul Temple): smuggling, espionage, wilderness exploration, mercenary work, long space hauls from world to world.

Traveller was a child of the 1970s. Its optimistic socio-economic vision of the future was a product of the 1960s and 1970s. It was obvious to me that the designers had read a lot of Poul Anderson (e.g. the Flandry books), Isaac Asimov (the Foundation books), Jerry Pournelle (the Falkenberg books and Mote in God’s Eye) and Robert Heinlein (Between Planets, Citizen of the Galaxy). That’s one reason why the game had ten shining years, when GDW added a canon universe, award-winning adventures, boardgames and much more.

Traveller’s weakness lay in the field of the humanities: culture, philosophy, ideology and religion were touched only lightly. Politics was of great importance, but mainly as nationalist and ethnic positions: the imperial citizens’ loyalty to the throne, the Solomanis’ racism, and the Zhodanis’ distrust of the “faithless” Imperials (a well-grounded position based on how their telepathy affected their psychology). I added my five cents to the canon by writing about the philosophy of the Darrian humans, introducing a dose of pseudo-Zenonian Stoicism in the game.

During the middle of the 1980s, the technology and macroeconomics of our world started to look very different from the 1970s and that made Traveller look a bit outdated (no desktop computers, no cell phones). Instead the noir-ish cyberpunk genre appeared on the SF arena, introducing technological and bio-medical concepts that were alien to the Traveller cosmos. So the game lost its place in the hearts and minds of the next generation of gamers.

For me, Traveller was the inroad into professional game writing. My first commercial sale was an article in Journal of Travellers Aid Society #5 in 1980. I had written some fanzine stuff earlier, but actually getting paid for a text buoyed my heart (thanks Loren). I continued sending articles about this and that in the Traveller cosmos to him until 1985 and he bought a few. In 1985, I was hired to write fantasy RPGs for a Swedish company and I put what I had learned from Traveller to good use in the new line of products, particularly hands-on advice on how run campaign and create NPCs and adventures. So Traveller will always have a special place in my heart. The glory days of my RPG youth are gone, but the memories are still sweet.

11 thoughts on “Traveller — the grizzled veteran”